School executives will create conditions that result in strategically re-imaging the school’s vision, mission, and goals in the 21st century. Understanding that schools ideally prepare students for an unseen but not altogether unpredictable future, the leader creates a climate of inquiry that challenges the school community to continually re-purpose itself by building on its core values and beliefs about its preferred future and then developing a pathway to reach it.
The artifacts provided below will demonstrate proficiency towards the North Carolina School Executive Standards.        Artifacts represent residencies at two schools in Wilson County: Elm City Elementary and Wells Elementary.
​Element Ia. School Vision, Mission and Strategic Goals: The school's identity, in part, is derived from the vision, mission, values, beliefs and goals of the school, the processes used to establish these attributes, and the ways they are embodied in the life of the school community.

At the 2017-2018 Opening Staff Meeting for Elm City Elementary, the administrative team went through our vision and mission for the school year. As you will see on the agenda and the PowerPoint that I helped create, the administrative team discussed celebrations for the prior school year, identified and discussed the strategic goals for the 2017-2018 school year, and went over the non-negotiables or expectations for all staff members.

In addition, I created and facilitated a digital scavenger hunt utilizing the Goosechase program. The digital scavenger hunt was an extension of the non-negotiables or expectations for staff and showed staff that in order to make the 2017-2018 school year a success, we all had to share a common vision. Also incorporated were some fun morale and team building activities. 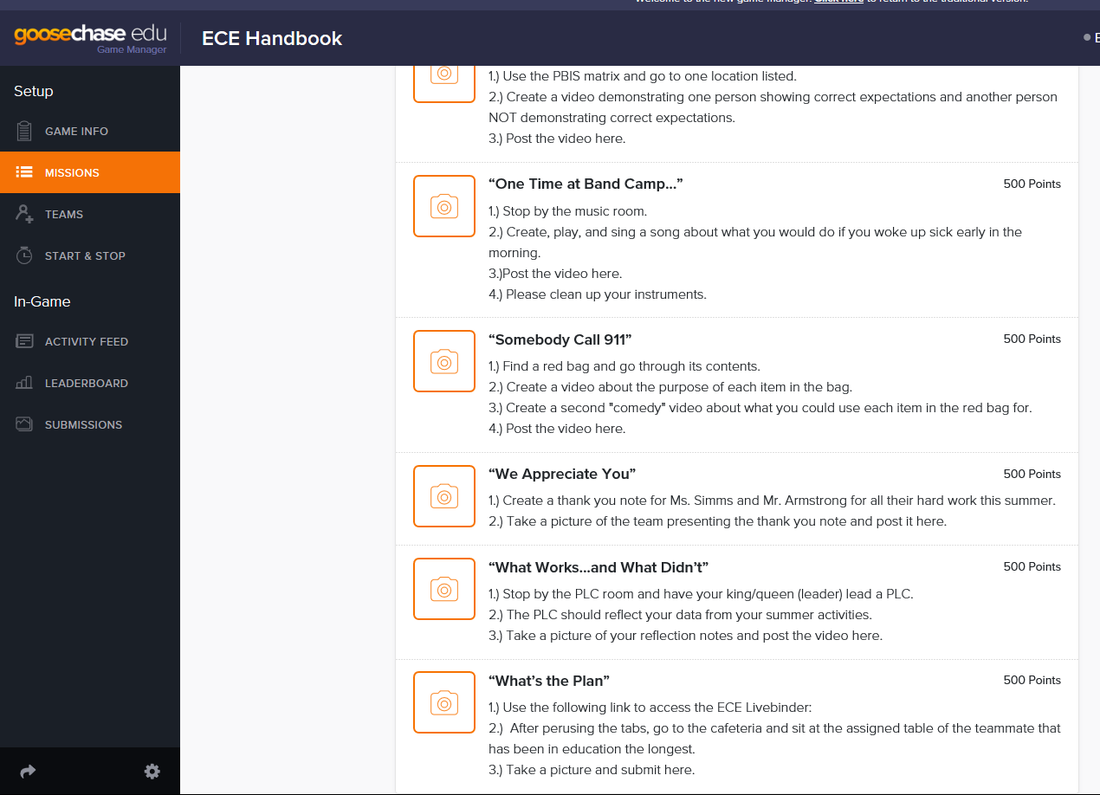 Element Ib. Leading Change: The school executive articulates a vision, and implementation strategies, for improvements and changes which result in improved achievement for all students.

​Attendance and discipline were two areas that the principal and I decided to target for change at Wells Elementary. We believed that poor attendance and discipline were hindering some students' academic achievement within the classroom. In order to target these areas, I created several new initiatives that would celebrate positive behavior and being at school all day, every day. The new initiatives were shared with the staff as seen in the Wells Targeted Areas for 2018 document. Student and teacher buy-in also had to be generated through consistent reminders and positive reinforcement from administration.

​After returning from the Winter break, there were several changes that needed to take place at Wells Elementary. Topics for change included where and how lessons plans were turned in, how field trips in the New Year would be handled, the process and documentation of office referrals, and several other important items that are noted on the PLC agenda provided. I facilitated the discussion of these changes during grade level PLCs.

​The 2017-2018 School Improvement Plan indicators had already been selected for Elm City Elementary prior to my residency placement. I had the opportunity to work with the principal and assistant principal to reword some action items and create new actions towards the chosen indicators after district feedback was given. These revisions can be seen on the draft provided. I was also in charge of several action items of the School Improvement Plan as seen on the final copy provided.

I created and sent out a ballot to the Elm City Elementary school staff in order for them to vote on the approval of the School Improvement Team for the 2017-2018 school year. This ballot provided an opportunity for the staff to share in the decision making of the representation of the school.

​Morning and afternoon duties were one of my responsibilities at Wells Elementary. Throughout the school year we lost many staff members because of the loss of positions, leaving the county, medical leave, etc. I had to revamp the duty roster that was created by the prior assistant principal and had to delegate afternoon coverage to staff in order to cover all transportation methods; you can see an example of this communication in the provided email. In addition, I had to ensure that if a staff member was absent, their duty coverage had been covered.